Serie A referee overturns his own penalty decision in Roma match 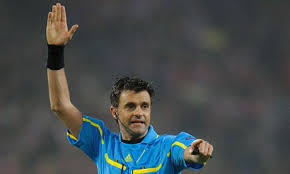 The Italian World Cup referee Nicola Rizzoli was involved in an extraordinary incident when he awarded a penalty and then changed his mind after five minutes of angry protests during second-placed Roma's 2-0 win at Sassuolo on Sunday.

Rizzoli initially awarded Sassuolo a penalty when their forward Nicola Sansone went down under a seemingly innocuous challenge by Roma defender Mehdi Benatia in the 36th minute of the Serie A match.

Both teams protested the decision, with Roma angry over the penalty and Sassuolo claiming that Benatia should have been sent off. Sassuolo had already put the ball on the spot and were preparing to take the kick when Rizzoli, after consulting his assistants, changed his mind and awarded a drop ball.

There were more protests at halftime as Sassuolo players again remonstrated with Rizzoli. Serie A uses the additional assistant referees system preferred by UEFA with extra match officials on each goal line.

"The referee didn't want to give the penalty but the goal-line official told him it was a penalty," Benatia told Sky Sport Italia. "He asked Sansone to telling him the truth, assuring that he would not get a yellow card (for diving). That made us a little angry, because you can't ask that sort of thing to a player whose team are battling relegation. Sansone said that he slipped but that I had pulled his shirt and the referee decided not to give the penalty."

Roma coach Rudi Garcia praised the referee's handling of the incident. "I think the referee did very well as he was the one who had to make the final decision," the Frenchman told reporters. "I think the goal-line official told him it was a penalty, while Rizzoli asked the player to be honest. Honesty always pays off and I compliment the Sassuolo player."

Roma had taken the lead in the 16th minute with Mattia Destro's 10th goal of the season. Sassuolo's Simone Missiroli was caught in possession by Radja Nainggolan and he then slipped the ball through for Destro to lift the ball over Gianluca Pegolo with a neat finish.

Roma's second came at the end of a leisurely second half when Sassuolo again lost possession in their own half and Brazilian Michel Bastos was sent clear to place his ball wide of Pegolo.

Roma's fourth successive win left then 11 points behind runaway leaders Juventus who were away to third-placed Napoli on Sunday evening.