Suarez hasn't got a leg to stand on and he must be charged over dive admission, says ex-ref Poll

The Football Association should charge Luis Suarez for bringing the game into disrepute following his admission that he deliberately simulated an offence against Stoke, according to former World Cup referee Graham Poll.

The ex-Premier League official and Sportsmail columnist has called on the FA to reprimand Liverpool's striker following last night's startling confession made in an interview with Fox Sports Argentina.

Poll said: 'Brendan Rodgers has said that Suarez is unfairly victimised but even he will struggle to plead his star striker's innocence after these 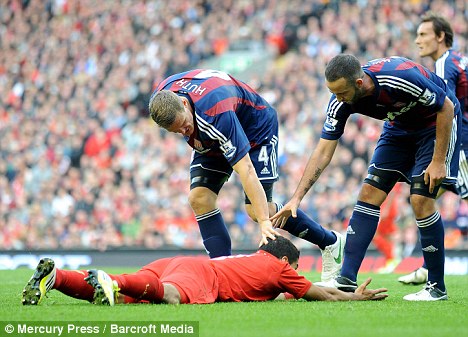 Dive: Suarez was referring to this incident against Stoke in October

Suarez said in his interview with the South American broadcaster: 'Let's see: they said that when we played against Stoke, for instance, and in that case they were right. I invented a foul because we were drawing against Stoke and I wanted to win.

'Sometimes on the pitch I say to myself, "What have I done?" But the name of Suarez sells papers.'

Poll added: 'Well, the name of Suarez should certainly attract papers now – those from the FA disciplinary department.

'Liverpool fans will, of course, claim victimisation once again but now that Suarez has confirmed what most outside of the red half of Merseyside have asserted all along even the most diehard must accept that their No 7 must be charged.'