Published on 11 May, 2009
By: David Rees
Category: Appointments

FAW Referee Dean John, who is rated as one of the Top Officials in the Principality Welsh Premier League, will take charge of an Irish Premier League match this evening.

Although he was originally appointed on the Longford Town versus Shelbourne game, which was a Second Division encounter, he will now be in the middle for the Premier Division match between Bray Wanderers and Drogheda United.

The referee from Cwmbwrla in Swansea flew out from Cardiff on Friday morning to Dublin and he will be pleased to see a familiar face when he arrives at the Stadium this evening. The 4th Official is Conor Fitzgerald who was the Irish Referee in the 2007 Four Nations Tournament in Inverness, which Dean also represented Wales at.

The appointment is part of the successful Referee Exchange that exits between Wales and Scotland, Ireland and Northern Ireland. Prestatyn-based Andy Harms has also been up to Scotland this year, whilst Lee Evans, Darren Adie, Mark Whitby and Huw Jones have also benefitted by going away on the exchange, which is organised by National Referees Officer Rodger Gifford.

WELSH Premier referee Dean John was involved in a controversial incident in the Irish Republic on Friday night.
The Swansea official took charge of the Irish Premier League game between Bray Wanderers and Drogheda United as part of the FAW’s referee exchange programme.
The visitors recorded their first win of the season after the game took a twist with 18 minutes remaining.
Assistant referee Mark Douglas summoned the Welsh whistler over to the touchline and, after deliberating, John brandished a straight red card to Bray’s stand-in skipper Chris Dean for an apparent off the ball incident.
But, although the incident seemed to galvanise the Wicklow outfit who went agonisingly close to levelling matters in the 78th minute, United held on for a 1-0 win thanks to a first-half goal from Brian King. 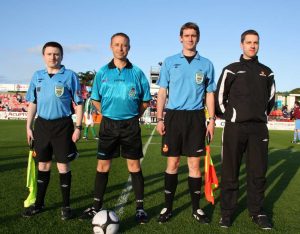